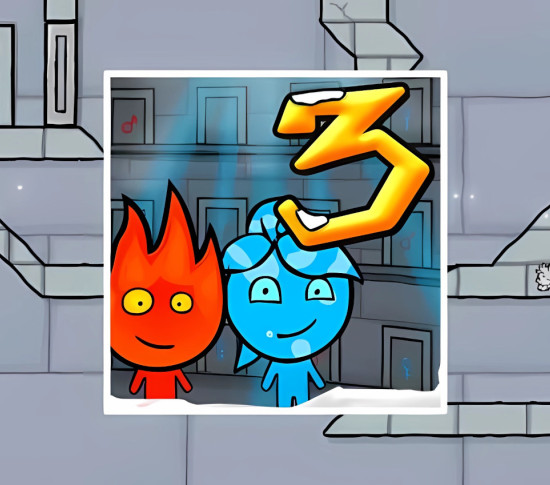 Fireboy and Watergirl 3 Forest Temple Again is a game where you need to control two characters on the same map. One of the characters are made of water and the other one is made of fire. You have to support each character with each other in order to make sure both of them will reach the exit doors on the stage. You can only complete a stage when both of your characters stand in front of their doors.

We believe that it is quite fun to play Fireboy and Watergirl 3 because you need to think differently than other games. You have to make the right decisions to make sure that both of the characters will be able to pass certain obstacles. Also, each character has its own gems to collect. You can still complete the stages without collecting all of them however you will earn more points by collecting all the games. Water girl can only collect the blue gems while fire boy can only collect the red ones.

How to Play Fireboy and Watergirl 3?

You have to use WASD keys and arrow keys on your keyboard to move the characters. WASD keys control the water girl while arrow keys help you to control the fire boy. It is possible to control both characters simultaneously. The space bar allows you to jump the character that is last controlled. There are some traps that you need to avoid with your characters. In addition to this, some traps are character-specific. To overcome such obstacles, you have to use your other character to open the way for him or her. In most cases, you will have to use both of your characters together to overcome the obstacles when you play Fireboy and Watergirl 3 in your free time.

We have two hero as always in this game. These are one Fireboy and other character is Watergirl. Move to smartly them on labirent because dangers wait you. There are everywhere dangers. These are the most important dangers are fire lake and water lake.

If you want, you can play with your friend. Don't forget! Watergirl uses WASD keys and Fireboy uses ARROW keys. Good enjoy!

Fireboy and Watergirl 3 Walkthrough
We use cookies to analyse our traffic and give our users the best user experience. We also provide information about the usage of our site to our advertising and analytics partners.