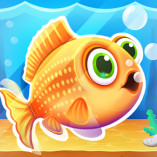 You as a Sharkosaurus need to escape the secret laboratory and fight the security service working for the science company?

There's a secret underground lab hidden in the middle of the California Redwoods. Mad scientists are trying to clone a killer beast that combines shark and dinosaur DNA.

Destroy cars, eat your enemies and smash lab equipment to stop this company's DNA theft. Also try to eat the ammo boxes so you can equip the super laser gun. The game allows you to use many different mechanisms to activate doors, elevators and stairs.

It is where mad scientists try to clone a bloodthirsty monster by combining dinosaur and shark DNA. You will play as Sharkosaurus and have to escape from the secret laboratory. You do this by fighting the security services working for the science company. Some crazy people are cloning killer monsters in secret underground labs. Their latest experiment is a bizarre beast made by mixing DNA from a shark and a dinosaur. And you are that monster! So use your powerful jaw to break your cage and attack! Attack the security guards and lab staff working for the evil company and destroy all their equipment like armored vehicles, military cars, jet-pack dudes, tanks, helicopters, quad bikes, monster trucks, jet planes and even a giant vehicle. dragon beast. You can also eat ammo boxes to equip with a super laser gun. Do you have the guts, claws and jaws to escape the facility?

You play as this monster and your goal is to simply escape the lab while killing all the people you see and destroy the equipment to prevent similar mad science studies in the future. On the way you will have to fight armored vehicles, military cars, jet-pack men, tanks, helicopters, ATVs, monster trucks, jet planes and even a huge dragon monster. If you find ammo boxes, eat them to equip them with a super laser gun. Have fun!

How to Play Sharkosaurus Rampage?

While playing the Sharkosaurus rampage game, you can jump back and forth with the "W, A, S, D" and arrow keys. You rotate the dinosaur left and right with the mouse. In each level, you complete the task by eating all the armed or unarmed people and then going to the end point. Armed people shoot at you, draining your energy. You collect stars by eating people and smashing cars, trains and boxes nearby. You can follow your remaining energy and the number of stars you have earned from the upper left corner of the screen. The number of tanks, cars, trains you need to destroy and the number of people you need to eat are displayed in the upper left corner of the screen. You are trying to keep your energy at the highest level by protecting yourself against armed people and vehicles. You complete the tasks given in each section as soon as possible and go to the end point and complete the game of sharkosaurus rampage.